This past 25 February, Fordham students Larissa Ross and Rita Orazi presented at the 2017 Hudson Valley Medieval and Early Modern Undergraduate Symposium at the College of Mount Saint Vincent.

Larissa Ross presented her paper, “Daughters of the King: Medieval Female Piety as Seen in Julian of Norwich and Constance in Chaucer’s Man of Law’s Tale.”  In her paper, Larissa looked to Julian of Norwich and Chaucer to explore late medieval conceptions of the metaphysical nature of women and of ideal female holiness.  Julian and Chaucer, contemporaries who influenced and were in turn influenced by the same cultures and ideologies, are rarely brought into conversation with each other.  Larissa placed Julian of Norwich, a renowned holy woman, into dialogue with Chaucer’s fictitious holy woman to see where both figures embody or toy with popular perceptions of what it meant to be a woman mystic considered holy.[Read on for more about Larissa and Rita’s presentations] 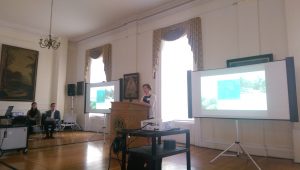 Larissa, who majors now in Medieval Studies, plans to continue her studies of late medieval female piety and its influence on religion, social environment, and literature.  She reflects upon her time working toward and during the conference as an invaluable chance for intellectual exchange that has aided her in expanding both her understanding of medieval studies and narratives and of how to approach them.

Rita Orazi delivered her paper, “Motivations for Crusading: Vengeance or Love?” which was an elaboration of a paper she wrote for Dr. Yeager’s “The Medieval Traveler” class.  Looking at the debate begun by Jonathan Riley-Smith and Susanna Throop over whether we can approach the act of crusading as one of love or of vengeance, Rita discussed revisionist interpretations and manipulations of history.  She emphasized the difficulty for modern audiences to understand the circumstances surrounding the Crusades and how problematic it can often be to relate the Crusades to modern conflicts in the Middle East now. 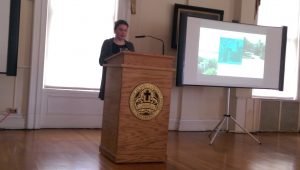 that, in comparison to the conference last year, this year was slightly more intimidating for the fact that the presenters were to present in panels before the entire assembled audience, rather than in smaller concurrent sessions.  However, because of this, this year’s Symposium had a livelier and more open-ended Q&A session after each panel.  While the prospect of presenting on something as wide and discipline-spanning as the Crusades was a bit daunting, Rita’s previous experience presenting and knowing that she was focusing on only on part of the discussion surrounding her subject material eased her mind and allowed her to focus all the more clearly.

The Center would like to congratulate Larissa and Rita for their presentations and would like to wish them well as they continue in their budding medievalist careers.