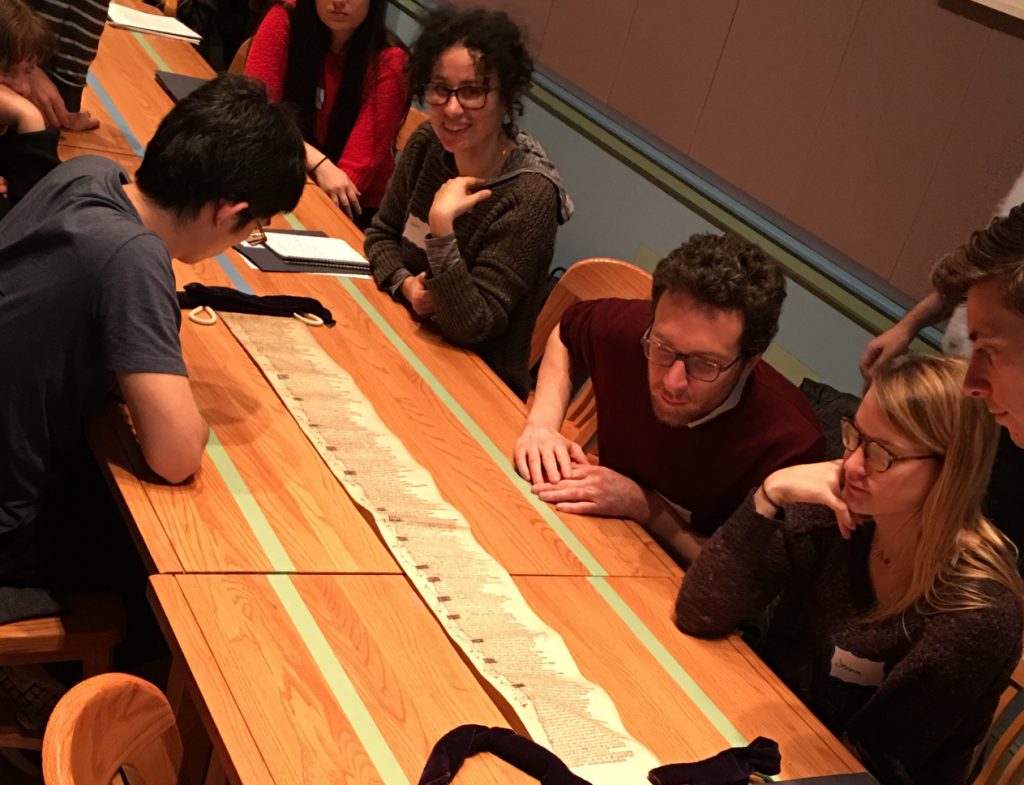 Alisa Beer (PhD, History) was fortunate enough to hold an internship with Consuelo Dutschke at the Columbia University Rare Books and Manuscripts Library in the Spring semester of 2017, through a joint program with the Fordham University Center for Medieval Studies. [Read on for more about Alisa’s internship and the workshop she helped to organize]

The workshop took place on March 24 and 25, 2017, in the Rare Book and Manuscript Library at Columbia, and was open to Columbia graduate students.  Its goal was the collaborative creation of a digital version of a MS roll, with accompanying searchable transcription & commentary.  Training goals for the graduate student participants included instruction in the paleography and codicology of medieval manuscipt rolls, digital editing and TEI markup, the use of XML editing tools such as oXygen, and project-based collaboration after the workshop concluded.

Alisa first encountered the Fifteen Oes of Saint Bridget, Plimpton Add. MS 04, when she was a student in Dr. Hafner’s Manuscript Culture class in the fall of 2012, when she visited the Columbia University Library as part of a course field trip.  When Alisa attended the Medieval Academy of America meeting in the spring of 2016 and heard about the Digital Editions of Medieval Manuscipt Rolls and Fragments project (DEMMR) at Yale University, the roll in Columbia’s collection seemed like a natural fit for the Yale project, which was looking to branch out into other collections and institutions.

Once Alisa knew she would be interning at Columbia University’s Rare Book and Manuscript Library, she reached out to Anya Adair, Katherine Hindley and Gina Hurley, the Yale graduate students in charge of the DEMMR project, about the potential of running an iteration of their workshop at Columbia.

Alisa acted as lead coordinator and taught the majority of the two-day workshop.  This involved creating a course website, and adapting course materials shared by the Yale coordinators, as well as organizing participants, brushing up on TEI and XML, and working with English paleography and transcription of the original manuscript.  Alisa also compiled the final TEI file from participants’ individual files, and encoded the second half of the manuscript, which was not assigned to participants.  The TEI-encoded edition, along with the digital images provided by the Columbia photography labs, will be hosted on the Yale website in the near future as part of the final digital edition.

In the process of transcribing this roll, we learned that the Columbia manuscript contains textual variants not present in the published versions of the text.  The prayers included differ from those in the Huntington transcription, and those that are the same are in a different order.  Consuelo Dutschke’s research into other known instances of this text revealed that while the Fifteen Oes is a very common text, known in more than 80 instances, only two of those survivals are in roll format, while the majority of the rest are in codex format within books of hours.

Hopefully, the availability of this digital edition will facilitate research on textual variants of the Fifteen Oes of Saint Bridget, a text that has received comparatively little scholarly attention to date.