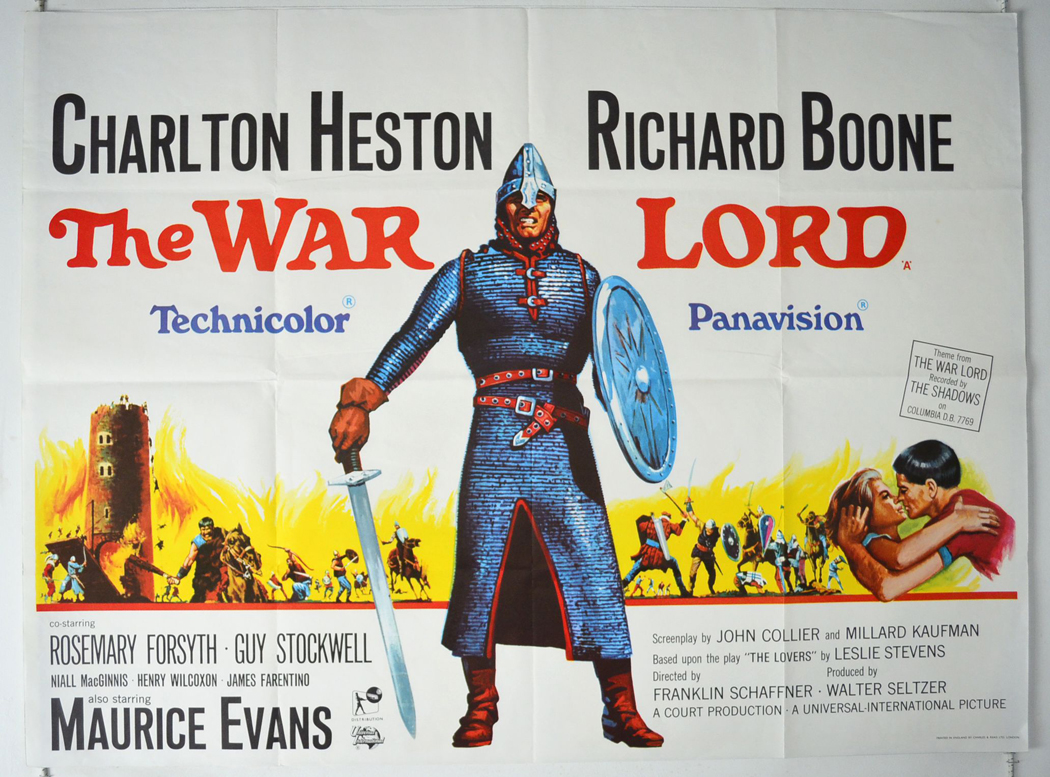 Last week, the Center for Medieval Studies hosted what we hope will be the first of many virtual Medieval Movie Nights! Students, teachers, and members of the wider academic community came together to watch the Charlton Heston 1965 classic The War Lord, an extremely mid-century attempt at a “realistic” medieval epic. Professor Nicholas Paul, an expert on the crusades and aristocratic cultures, was on hand to provide commentary, although it is safe to say that his research did not corroborate the events on screen. Donning a kingly cloak (bathrobe), pipe in hand, he guided us through the wildly misogynistic vision of the medieval world which Heston somehow considered his most important work.

In the film, Heston plays Chrysagon de la Cruex, a Norman knight put in charge of a Flemish village that is plagued by Frisian raiders. Though the town has a priest, most of the Flemish villagers are druids. Chrysagon rescues a local woman, Bronwyn (Rosemary Forsyth), from harassment by his own men, and begins to fall in love with her, but she’s due to marry a local man. When the man’s father asks for Chrysagon’s approval of the marriage, Chrysagon gives it, but soon regrets the decision. Instead of getting over it, however, he decides to invoke the (apparently) druidic law of prima nocta, which allows him to claim her for the night (ruining her wedding in the process). When he refuses to give her up, the townsfolk and the Frisians team up to save her: little do they know that in the meantime (or maybe all along?) she had fallen in love with him.

This “remarkable” (i.e. horrifying) turn of events is of course more indicative of the prejudices of the time the movie was made than any medieval reality. The film hits all the tropes of the “bodice ripper” romance, in which women have no agency, and non-consensual sexual advances miraculously become consensual for no reason at all. Beyond the sexism (Alison Bechdel would not be a fan) the film also treats the villagers as ignorant savages, and concocts a “druidic” religion for them solely to serve as a foil for Christian enlightenment.

Still, the movie is a fascinating glimpse into the mindset of an old Hollywood producer, and an enjoyable spectacle that makes great use of practical effects. The storming of Chrysagon’s “fortress” (really a small tower oddly built 10 feet out from the mainland) involves a set piece siege tower, and when the defenders light it on fire, it is quite a sight to watch 1960s Hollywood hopefuls risk their lives diving out of it into the water below.

Although watching via Zoom could never replace an in-person hate watch, the viewing went off without a hitch thanks to the efforts of Associate Director Christina Bruno. The chat filled with jokes and comments on the movie’s insanity, and after it was over, we debriefed on the biggest flop of Heston’s career. Look out for details on our next Medieval Movie Night!