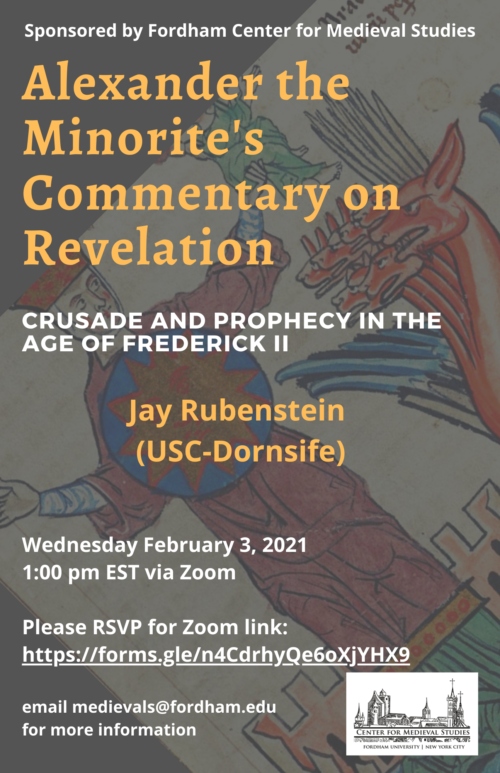 The Center for Medieval Studies was thrilled to be joined by Jay Rubenstein, Professor of History and Director of the Center for the Premodern World at USC Dornsife, for a lecture exploring the commentary of Alexander the Minorite on the Book of Revelation. He was inspired to explore the topic several years ago by Fordham’s own Professor Nicholas Paul, Director of the Center for Medieval Studies, making the setting particularly appropriate.

We know very little about Alexander, other than that he was writing in the time of Frederick II. He may have been from Bremen, and he may have been a Franciscan, but we can’t be certain in either case. His goal in writing his commentary was to discover and reveal concordance between the Book of Revelation and subsequent events in the history of the church. In this respect his project was similar to that of his more famous predecessor, Joachim of Fiore, but his methods and conclusions were not. For example, perhaps singularly in Revelations commentary, Alexander portrayed the Roman emperor Caligula in a positive light.

Another of Alexander’s innovations is visual. When connecting the seven angels of Revelations to historical figures, Alexander illustrated them with two heads: one for the angel, the other for figure who embodied them in subsequent history. In addition, Alexander’s commentary was uniquely fixated on the period of the First Crusade, which dominates the second half of the work.

Professor Rubenstein concluded his talk by noting the recurrence of millenarian beliefs in our own time, through the QAnon phenomenon, whose followers formed a strong contingent at the Capitol Riot. Follow the Fordham Center for Medieval Studies for updates on future events!