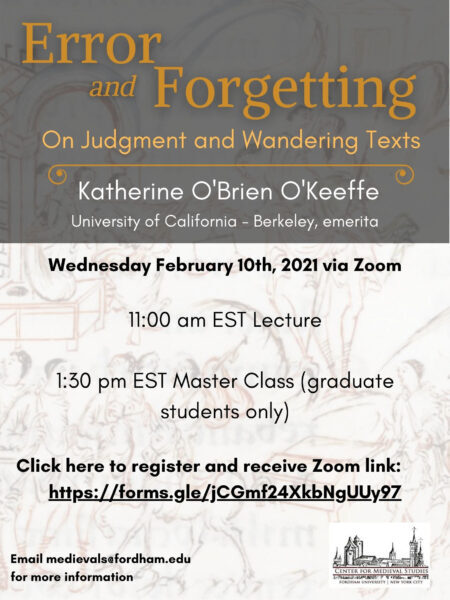 Last Wednesday, the Center for Medieval Studies was joined for a lecture and master class by Professor Katherine O’Brien O’Keeffe (UC Berkeley – English) entitled “Error and Forgetting: On Judgement and Wandering Texts.” Professor O’Keeffe’s research focuses on the literary culture of Anglo-Saxon England, and Wednesday she discussed notions of error and forgetting in early medieval texts, and relatedly, the creative impact of scribal errors in manuscript transmission.

Embodying the connection between these two topics, she began her talk with a discussion of the curious reversal that takes place in an Old English translation of Boethius. Whereas Boethius discusses in Augustinian terms the idea that even to forget something requires remembering, the translation includes the statement that God doesn’t remember because he doesn’t forget. This innovation of error then found its way into the later work of Alcuin, demonstrating the surprising importance of scribal errors to philosophical creativity.

The potential power of error was not lost on early medieval writers. Aelfric of Eynsham wrote constantly about his fear that scribes would not just introduce frivolous errors, but works with vastly different meanings than that he intended, founded on the authority of his name.

Professor O’Keeffe concluded her talk by encouraging those in attendance to be mindful of these productive surprises in manuscript traditions. She also noted that such errors are not only a medieval phenomenon: when a publishing error turned Herman Melville’s phrase “the coiled fish of the sea” into “the soiled fish of the sea” it was hailed as a particularly interesting turn of phrase before his intentions were learned. Follow the Fordham Center for Medieval Studies for updates on upcoming events!