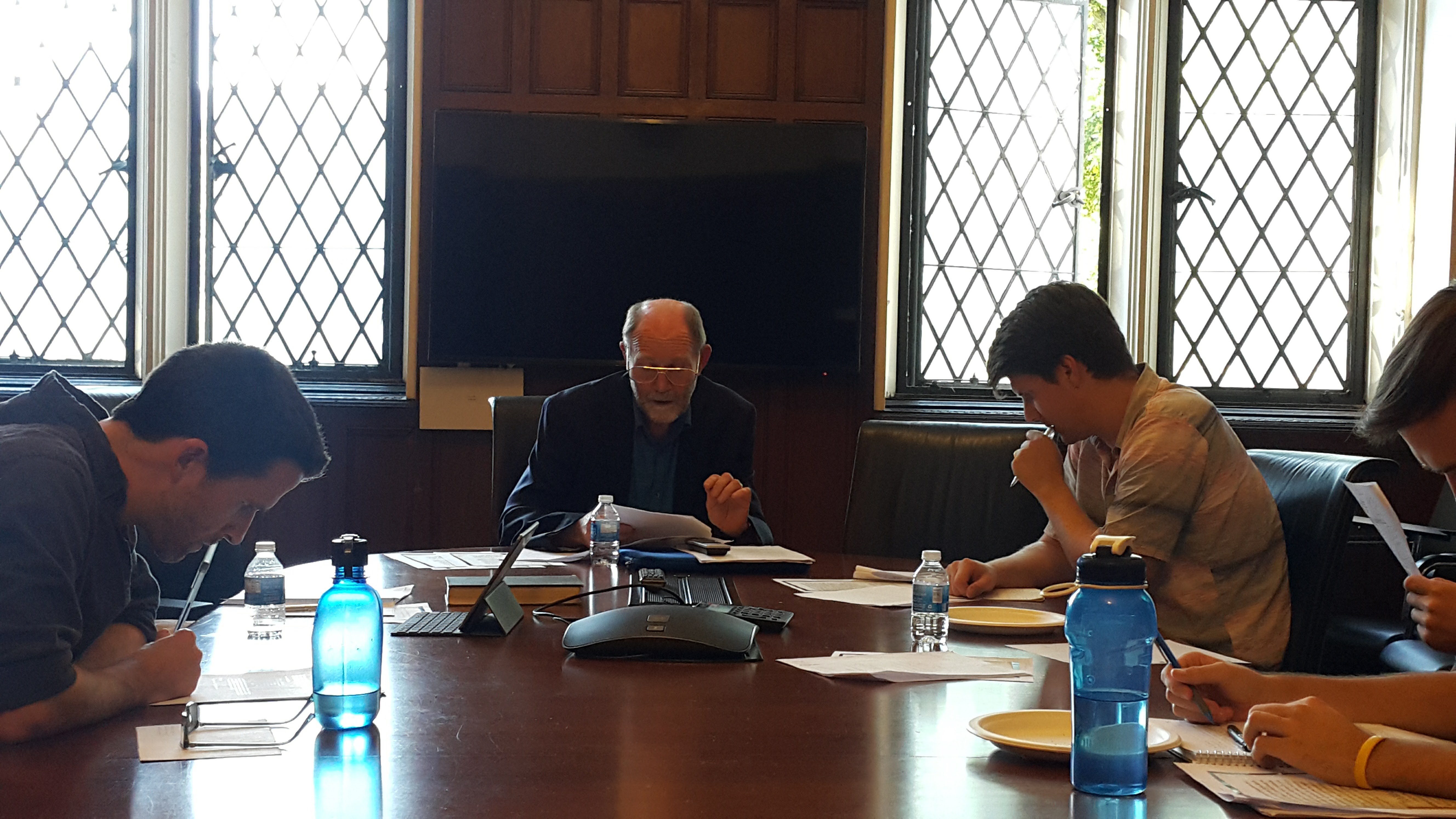 Medieval Studies kicked off its 2017 event series with a visit from a world renowned scholar of Old English literature and culture. John D. Niles. Dr. Niles, professor emeritus a the University of California-Berkeley and the University of Wisconsin-Madison, has been in residence this past Fall at the Dumbarton Oaks Research Library and Collection, and we were delighted that this made it possible for him to come up to Fordham on September 28-29.

Professor Niles and a small group of students discussed the contents of Exeter Cathedral Library MS 3501, commonly known as the Exeter Book. Niles suggested some ways that the codex can be read as a whole and pointed out a number of common themes and internal pairings among the book’s poems. Against the predominant trend of scholarship to read the poems in secular terms, Niles suggested that the book be placed in the monastic context in which it was likely produced. Niles provided some fascinating insights both into his own work (he is currently writing a book on the Exeter Book) and into the thinking and research that remains to be done on this important codex.

The following day, the whole Medieval Studies community was treated to a lunchtime lecture in which Niles introduced his new project to edit and translate the entire corpus of medical texts written in Old English (the first time that such a thing has been attempted since the 1860s). Niles’ current project is undertaken in collaboration of fellows medievalists Debby Banham, Christine Voth, and Maria D’Aronco, who will together produce a two volume edition and translation.We asked Jeffrey Doolittle, a PhD candidate in History working with medical manuscripts in his own doctoral research, to give us his take on Niles’s presentation:

In his talk, Niles provided an introduction to this project, and also gave a helpful overview of the rather striking differences between the main texts of the Anglo-Saxon tradition, including Bald’s Leechbook, the Old English Herbarium and Niles’ own area of expertise, the Lacnunga. With its curious blending of classical, Christian and magical elements, the Lacnunga has been held up as evidence of the scientific dead-end of early medieval medicine as well as a window into pagan Anglo-Saxon beliefs and traditions. Following more recent trends among Anglo-Saxonists, however, Niles reckons both of these trajectories as incomplete and instead sees the Lacnunga as an example of what he terms “total medicine:” a model which emphasizes elements of practicality and utility in the synthesis of therapeutic methods from diverse sources and traditions. In other words, Niles holds that framers of texts such as the Lacnunga recorded many different ways to a cure in the hopes that something – anything – would work. This is an intriguing idea and marks a new frontier in the ongoing reconsideration of early medieval medicine. I do wonder about the “total” part of the term, though. As Niles himself pointed out, despite the clear “unparalleled variety” in the written traditions of medicine in Anglo-Saxon England, a much wider therapeutic world which we cannot see existed beyond the pages of parchment. Also, for purely selfish reasons, I would have liked if Niles refined his definition of “Anglo-Saxon medicine” a bit more. As Linda Voigts, Marilyn Deegan, and also Niles’ colleagues Debby Banham and Maria D’Aronco have shown, “Anglo-Saxon” can be a problematic term when it comes to describing vernacular medical texts such as Bald’s Leechbook, which have demonstrably classical sources; the Lacnunga may be another case altogether. Further, I felt that portions of Niles’ presentation veered into the same sort of morbid curiosity that he so strongly critiqued elsewhere (with a wide-eyed reading of the more disgusting or bizarre medieval recommendations). These minor critiques aside, however, Niles presented a welcome reassessment of the editorial decisions made by the compilers of the Lacnunga, a text that continues to defy easy categorization.

As a student of medical history, I was fascinated by Dr. Niles’ perspective on Anglo-Saxon approaches to healing. He provided a rich introduction to the corpus of medical texts, and I especially appreciated his effort to give context to their more “folkloric” aspects, which are too often belittled. He is a wonderful and generous scholar, and one whose work I will remember.

Thanks Jeffrey and Joseph and all others who came to Professor Niles’s events. But thanks most of all to John D. Niles for his generosity and for inspiring us with his knowledge about Anglo-Saxon texts and manuscripts!