A Medievalist’s Summer Adventures: Michael Weldon in Ireland and Brittany 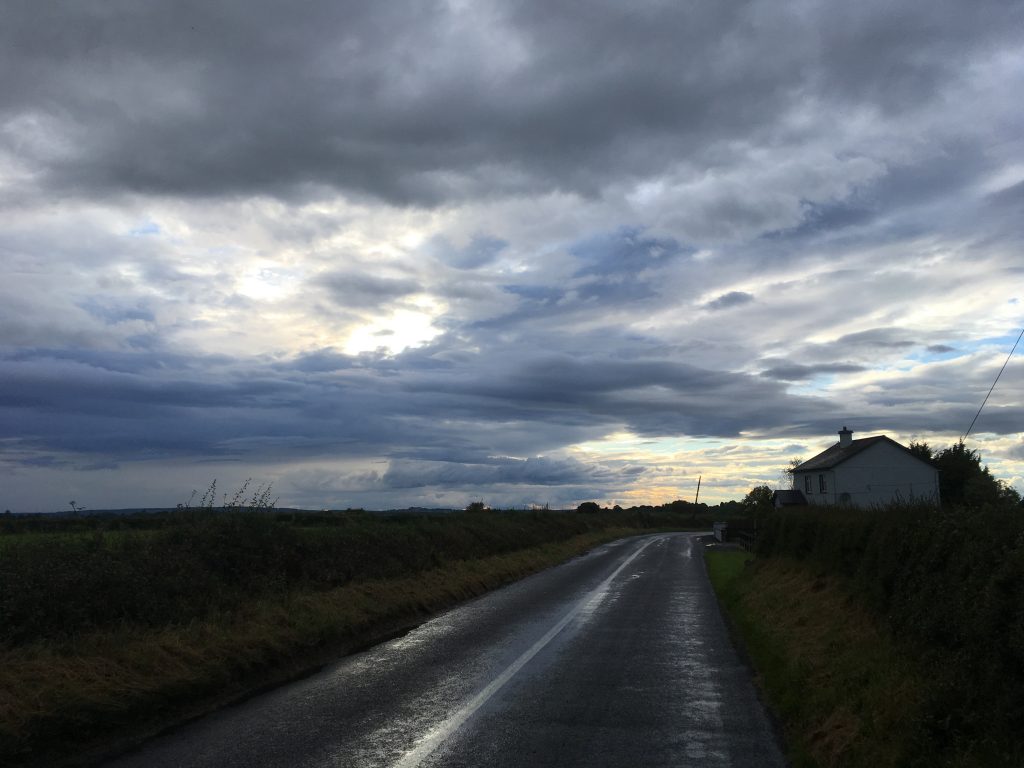 Summer is a time when students in the MA in Medieval History explore further aspects of their research, often working hard expanding prior projects in anticipation of the MA thesis. For medievalists, that can often entail travel to archives or sites to expand their knowledge and expertise. We asked our MA student Michael Weldon to tell us about his adventures this summer, which involved work relevant to his MA Thesis on the Harkness Gospels. Michael’s travels, which were funded by a Fordham Professional Development Grant, took him first to Ireland, where he worked on an archaeological dig centered on a 14th century Norman castle, and then to Brittany, France, where the Harkness Gospels were created. [Read on for the details of Michael’s adventures, and find out more about the Harkness Gospels and the production of medieval manuscripts]. 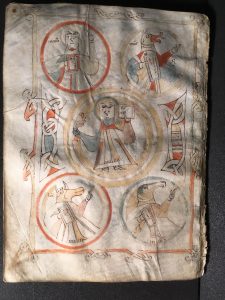 Michael first encountered the Harkness Gospels during the Manuscript Cultures class taught by Professor Susanne Hafner in Fall 2016. The manuscript, which was created in the late 9th-early 10th century, is now held in the Manuscripts, Archives, and Rare Books Collection of the New York Public Library. The Harkness Gospels is a mysterious manuscript, containing illustrations (not really what we might consider “illuminations”) in a strange, apparently unsophisticated style. Michael reports that upon seeing the manuscript, he wondered “what explanation might there be for this insular manuscript’s style of imagery and quality of parchment when regional masterpieces such as the Book of Kells and Lindisfarne Gospels were completed as much as a century earlier?”

In order to pursue his research, Michael applied for a Professional Development Grant from the Graduate Students’ Association. The grant that he received was carried out in two stages. Stage one involved a four-week long archaeological/anthropological intensive field school in County Roscommon, Ireland. Located in central Ireland, the ongoing excavation took place at a 14th century Norman construction, Ballintubber Castle.

Of the dig, Michael writes:

“Staying in a village farmhouse a mile and half from the site, though it was July, thermals, wool socks, and a raincoat were essential.  Working between 12 and 14 hours most days, it was a challenging program to be a part of.” 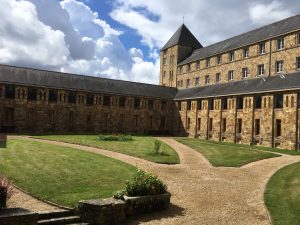 Landévennec, Cloister of the Abbey

Upon completion of this course, Michael took his newly acquired skills to Abbey Landévennec in Brittany for stage two of the grant proposal. Finally, Michael had arrived at the abbey where the Harkness Gospels was produced. Michael conducted research at the abbey’s medieval ruins, its associated museum, and its library archives. According to Michael:

I followed the daily routine of the monks, sharing meals and conversing with them when possible. As stage one of the proposal informed stage two, my six-weeks spent in Ireland and France were profoundly informative and both professionally and personally remarkable.  Many thanks for this tremendous opportunity.

Many thanks to you Michael for sharing your story and photographs!